I cant believe its 3 months since I last put something on my blog.  Such a lot has happened, but more of that later.  I managed to start crafting again this weekend and it was lovely.  I bought from Stamps Away, some months ago, two Spitfire stamps.  I thought they would be useful for Men cards!  I particularly had in mind my ex husband (yes - we are still friends) as his birthday is in November and he loves planes and plane spotting.  He used to be in the Royal Observer Corps when he was young, as was his Father before him, although of course his Father was in the Observer Corps during the war.  Anyway I decided it was time to make his card, but before I started I just had a quick look through the various challenge blogs and saw the Remembrance challenge on The Male Room, so I thought I would have a go at that.  Here is the card.... 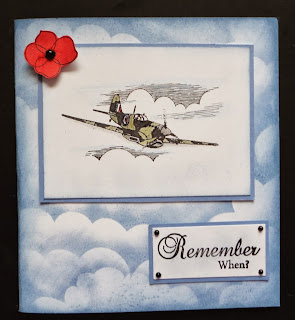 I coloured in the spitfire and sky etc using water colour pencils, I dont have much success with Promarkers,
but I have discovered they dont photograph well, the colours dont show up.  I will have to in future paint using Distress inks or paints or persevere with the Promarkers. I first mounted the image on pale blue card and then on to a plain white card, but I didnt like that so I took it off and sponged the cloudy background using Stormy Sky Distress ink and a cloud mask. The sentiment is from Sheena Douglas and the poppy was made using a Stampin' Up stamp and coloured with a red Promarker.